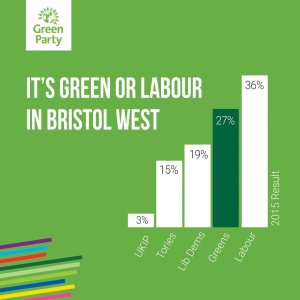 We’ve already knocked on thousands of doors in Bristol West in this campaign, and the most common reaction we get is “we must keep the Tories out”.

As Greens, we agree. As a party, we have led on attempts to negotiate deals in seats the Conservatives hold or threaten to take without a strong, singular progressive-minded voice on the ballot paper.

However, Bristol West is different. The result in 2015 shows a few things:

1. Labour just beat the Greens last time leaving the Lib Dems and the Tories in a distant third and fourth place.
2. Even if the entire UKIP vote from 2015 went to the Tories, they would still be in fourth.
3. The Tories cannot win this seat (and won’t be attempting to), so progressive voters can back the Greens and make history by electing Bristol’s first Green MP.

A Green MP would work cooperatively with other progressive MPs but hold Labour to account where the party’s policies veer away from the progressive values this constituency holds dear.

The differences between a Green MP and the Labour Party’s approach are profound:

A second Green MP would do more to push a Labour or Conservative government to do what is right by providing effective opposition and critique when it matters.

Theresa May does not want another Caroline Lucas in Parliament. She does not want Molly Scott Cato to be elected – an economist who can lay bare the inadequacies and falsehoods of the Conservatives’ disastrous economic policies.

If you want a future to believe in, it’s time for a Green MP in Bristol.