Bristol West: 10 minutes with each of your local Green candidates in May 2015 Number 5: Carla Denyer (Clifton East)

Carla Denyer is the Green Party candidate for Clifton East. She is a renewable energy consultant, based in Bristol. 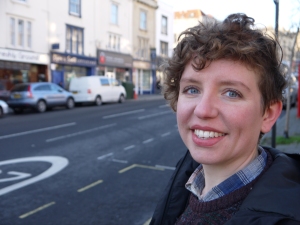 Why are you standing to be the councillor in Clifton East ward?

I’m standing as the Green candidate because I realised around four years ago that my values aligned very well with the Green Party’s. I’ve been involved in the party ever since then, but this is the first time I’ve stood as a candidate. I’m really excited by this opportunity to represent the people of Clifton East on Bristol City Council – and I hope I’ll do a good job. The reason I’m standing in Clifton East specifically is because it is near where I live (I don’t quite live in the ward but not far away) and it is within Bristol West which is the constituency that we have a really good chance of winning this time around. I was already involved in the campaign for Bristol West and I thought one of the best ways to help that campaign would be to run as a councillor at the same time.

What are the biggest issues facing Clifton East as an area of the city?

My number one priority is better transport and travel options. The Green Party would like to see an integrated transport authority in Bristol (similar to Transport for London) which would help public transport services to be better linked up, and for there to be a unified ticketing system (a bit like an Oyster card). It just makes so much more sense and makes public transport a viable first choice for people rather than their last resort, or their begrudging first choice – because they know it’s better for the planet but it’s not very convenient. I think this is the situation that a lot of people are in at the moment.

I think that Clifton East has some reasonable public transport at the moment. We’ve got a couple of good bus routes going through it, and Clifton Down station. It’s great that they’re there, but they’re not very frequent, they don’t run very late into the evening so they’re not really that useful for a lot of people. And ultimately I think public transport should be run for the benefit of people and be as convenient as possible, not to maximise profit.

Community facilities could be improved. There isn’t a single community centre or anything like that in any of Clifton East ward, or the neighbouring Clifton ward. The closest thing we’ve got is a couple of libraries and those are both at threat of being closed down. So I think we need to fight against the potential closure of those libraries – we are already doing so in fact – and there need to be more opportunities for people to engage with their community and if they don’t have a hub to do that, then it’s always going to be difficult.

The Green Party have been focusing a lot on the Ethical Lettings Charter that the ACORN community union proposed and Green councillors got passed recently at a Full Council meeting. Clifton East, and the neighbouring ward of Cotham, have a really high proportion of renters, much higher than the rest of Bristol – which is itself higher than the national average. A lot of those are in large houses, converted into many small flats, and often not in good condition. Landlords are charging high rents and estate agents are charging high tenancy fees, which makes it really difficult for people. So the Ethical Lettings Charter is a voluntary code that letting agents can sign up to, to say that they won’t charge tenancy fees, will not make revenge evictions, will ensure a minimum energy efficiency, and various other steps to protect tenants’ rights. Ultimately, I’d like it to be law, but this is a great first step.

People may have voted locally for the Green Party, but why should people vote for a Green MP?

Because if you’re ever going to vote Green nationally, now’s the time to do it. This is the year when you can vote with your heart and your head – you don’t have to choose one or the other. If you agree with Green policies, then Bristol West is the seat where we’ve got a really good chance of getting in. It would be so powerful to have another voice in Parliament – to have Caroline and Darren. The result of the election is so unpredictable and we don’t know what the composition of Parliament is going to be. It’s looking unlikely that any single party is going to have a majority. The more representation of smaller parties, the wider the range of views in Parliament we can get, the better.

What’s your background? What are you doing at the moment? What are the passions that drive you?

I’m an engineer in my day job. I work in the renewable energy industry, for a consultancy based in Bristol. I got into that because about halfway through my degree, I had a bit of an epiphany about environmental and social justice issues and how related they were, and I felt that I really had to do something about them. So I looked at the trajectory my career was already on – mechanical engineering – and tried to figure out how that best overlapped with my values.

Obviously with mechanical engineering I could have gone off and done aerospace, defence, cars… lots of avenues that I deliberately didn’t go down, and decided that sustainable transport or renewable energy were the things I would focus on. I was very lucky to get this job in Bristol after I graduated. I now work in that job four days a week, which was a deliberate choice back in 2012 to be able to spend more of my time on campaigning, including the Green Party.

What do you like most about Clifton East and being around this area?

It’s mostly a residential area, there are not a huge number of businesses in the ward, so perhaps a lot of people don’t know it well or have reason to go there very often, but I recommend it!  It’s obviously got the well-known and busier areas like Whiteladies and several nice cafes and restaurants along there – I was already fond of those.  I’ve got to know it even better as I’ve been canvassing, and found lots of lovely little quiet streets that I think most people don’t know exist, and it seems a lovely place to live.

What other challenges are there locally and nationally?

Austerity’s got to be the main one. Reversing all the different varieties of privatisation that have been happening thanks to the current government has got to be a priority for whatever combination of MPs gets in in May. I’m passionate about bringing rail and public transport back into public hands, keeping the NHS public, stopping the creeping privatization of our universities. I think the Greens have got by far the most credible policies for addressing those. The SNP and Plaid Cymru seem to be leaning the same way as us, so I hope they get MPs elected too.

If you were Mayor for the day, what single thing would you do?

I would change the rules that apply to the Mayor position. We had a referendum in Bristol a few years ago and the population of Bristol decided that they wanted a Mayor.  But a quirk of the way that referendum was organised means that there is no legal means by which the population of Bristol can call another referendum and decide not to have a Mayor if it wants to – and I think that’s awful! So I would make it so that I and all future Mayors can be recalled by popular vote, or the role be closed down by popular vote, if that’s what people want in the future. (If I could have a second: I would make it so that more big decisions had to go to all of the councillors. At the moment, it’s only the budget.)

For all of the other Bristol West 10-minute interviews, go here: http://robertjessetelford.com/blog/?page_id=474